Notes on Composing for Little India: Village of Dreams 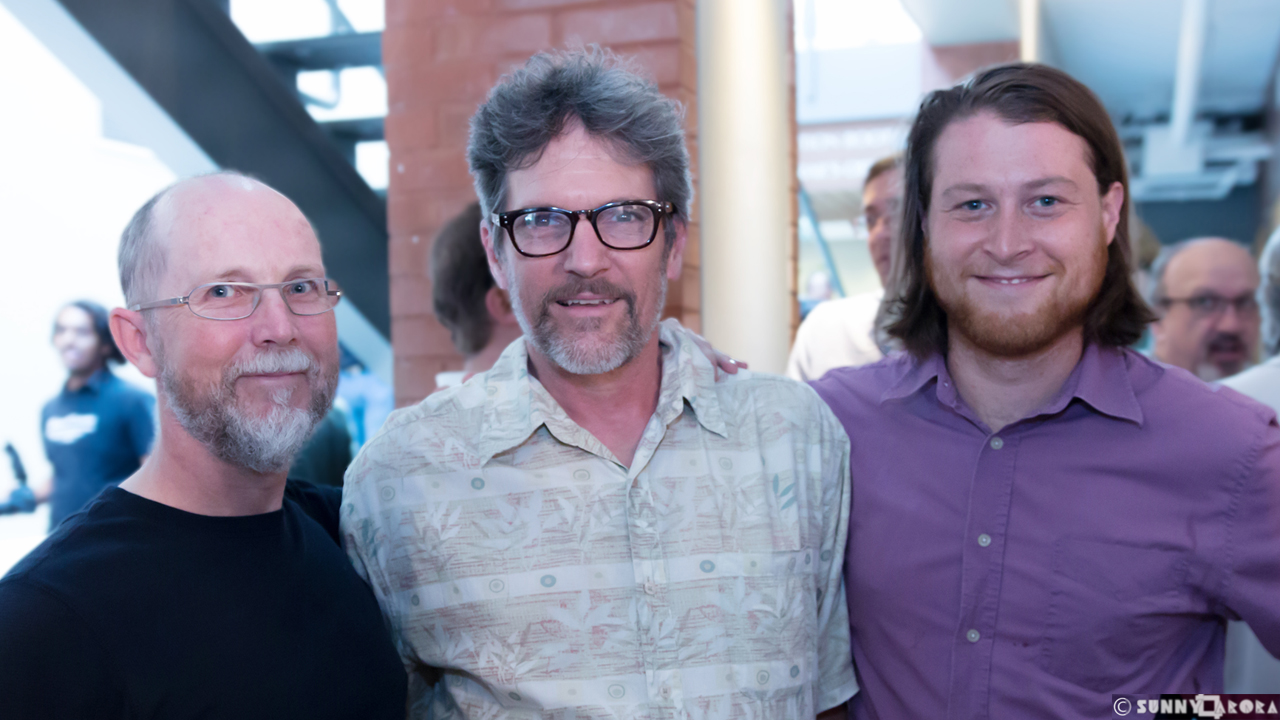 UPDATE: LITTLE INDIA VILLAGE OF DREAMS HAS BEEN NOMINATED FOR
A 2018 CANADIAN SCREEN AWARD FOR BEST ORIGINAL MUSIC, NON-FICTION

Notes on Composing for Little India: Village of Dreams – by Composer Phil Strong

Where to start? This was the question both in creating the soundtrack for Village of Dreams, and with this blog entry!

When Nina Beveridge approached me about composing the score for her documentary about the denizens of Little India, I was both excited and apprehensive. I called my writing partner, Thomas Hoy, to share the good news and brainstorm ideas for approaching the score design and realization. Neither of us are scholars of Indian music but Thomas had travelled through India and returned with inspiration and instruments – and I had gained an appreciation of the diversity and richness of Indian music working on Ali Kazimi’s film, Continuous Journey. Ali and I had worked closely together recording musicians Kiran Ahluwalia and Shahid Ali Khan amongst others. I’ve also worked with artists such as Bageshree Vaze, Vineet Vyas and Nova Battacharya in the world of contemporary dance performance. In contemporary dance, there is great latitude (and expectation) for stretching and distorting cultural norms – and it seems to me Village of Dreams’ score was influenced strongly by this ethic.

However, although the conspicuous culture of Little India is “Indian”, the Village of Dreams is a story about Canadians and represents sensibilities that are  incredibly diverse. Thomas and I felt from the beginning that the score for Nina’s film was not going to adhere to any particular classical form – except in the “diagetic” music present in the businesses and homes of the characters in the film.

That being said, it was a long, interesting process with many changes of direction to find our way into writing music that would serve the film and also be relevant and respectful to the people in it. We researched Indian music & instrumentation, as well as visiting the places and people in the film and considering their mix of influences. We then worked at developing theories on how to weave these aspects together into a coherent musical approach that would create an evocative as well as an appropriate harmonic structure for Village of Dreams. In addition to Indian influences, we fully understood this to be a Canadian story and therefore did not want the music to be “of” India – but rather belong to the Village of Dreams itself – a very Torontonian enclave. One instrument that came to mind immediately is Mark Korven’s “Sarello”  – a custom instrument Mark commissioned from luthier Tony Duggan-Smith. The sarello is a hybrid instrument combining the Indian Sarello and a western Cello. Mark also suggested Justin Gray and his invented instrument, the electric Bass Veena. These contemporary hybrid instruments played significant roles in the timbre of our musical world.

Below is a “window” into a bit of our working world… a screen capture of software we use for writing and recording music. This is a complete timeline of the film, broken up and labelled with the elements at play at any given moment which we felt would be our guiding influences in creating music. There is no music in this “session” (yet) just indicators as to where it will go and what it might be. 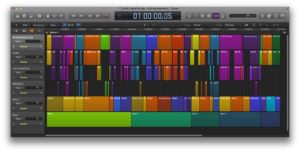 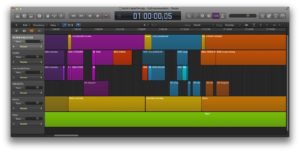 The top row lays out each “scene” or block. One of Nina’s early ideas was to have a different musical “theme” for each different family or business and although we considered and tried other approaches, this is exactly what we ended up with as the overriding ethic in constructing our music. These recurring themes are identified by colour in the top row. The themes themselves are derived from the world of the characters – their situation, predilections, faith, age, outlook. In fact, we took Nina’s idea a bit further to create “stings” which would punctuate (rather than ease) transitions and take us to the next characters and story component. This is a cheeky rip on TV-sitcom-style production and it was certainly more overt for certain characters than was others.

The bottom 2 rows of the image indicate the time of day at any given point in the film as well as the overall progression of time as engineered by the film’s editor Paul Hart. We had compiled a comprehensive list of Indian ragas and organized them by various means including Thaat, era, and other associations – but also including the time of day (or season) associated with each raga. This did inform choices of melody in the opening and closing sections as well as other, mainly transitional, moments.

In the expanded view (right side above) it is easier to see that the middle three rows indicate where music is going come and go. This is my way of drafting a plan for theme-driven changes in mood and texture and where to engineer transitions within a scene as well as indicate elements that are in play from one scene to the next. One of the challenges was to weave the diagetic music into the score (or visa versa) and to do this we would pick key centres and tempos/rhythms in our written music that would blend as the music transitioned from one to the other. After watching the TVO presentation, my dad called to congratulate me… but had to ask “What music was yours? What did you actually do?” – which…. I took as a compliment! Although at the same time… good question. In the end, some diegetic/source music was included, but not much. Some inspiration in the score is owed to melodies derived from Indian ragas, some from the performance the musicians, some to all the established musical genres and techniques employed.

One of the great joys of this work is the great people we get to work with. The collaborative aspect with Thomas, Nina and Paul – and the musicians we recorded, not to mention the inspiration of the people depicted – cannot be understated. It is always an amazing feeling to hear written parts actually fleshed out and made “alive” by wonderful musicians. It was a great pleasure working with Bageshree Vaze, Vineet Vyas, Ed Hanley and Mark and Justin and their instrumental specialties (and special instruments).

In the end, it was an enormous pleasure as well as a great challenge to weave all these ideas and elements together. Thanks Nina and Paul for inviting us into your Village of Dreams!

Explore the Village of Dreams website and watch the film here.